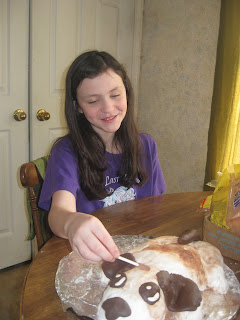 So yesterday was a "kitchen" day. Meaning I spent the entire day in the kitchen, which is not normally my favorite thing to do, but yesterday was an exception. I had a blast. I made the raw materials so that Emily could make a doggy "cake" - a unique kind cake made of rice krispie treats, wrapped in fondant, decorated with modeling chocolate and cocoa powder and placed on a giant cookie. A few things I learned during the day -


So the day is over, the kids ate the face off the dog (I know, they're twisted. Or maybe they just couldn't stand to have him stare at them as they slowly devoured him from the rear, I don't know) and I had a chance to play with my daughter and my Kitchen-aide while learning patience and perseverance. Joel and the boys kept things running like a machine, doing whatever needed to be done to keep things going smoothly. I have such a great family. It was a really fun day.

Oh, and then a group of friends kidnapped me and took me out for a delicious treat that I didn't make. It was so good! I really have great friends. Thanks, girls.